Montreal, Quebec, January 18, 2016 – ExposNation, a non profit corporation dedicated to promoting the return of Major League Baseball to Montreal, is excited to congratulate Tim Raines on his National Baseball Hall of Fame honor, and to make a related announcement. ExposNation is pleased to confirm that there will be organized buses for Expos fans in the Montreal and surrounding areas to attend Raines’ induction into the Cooperstown based Hall of Fame on July 30th. More details will be announced in the spring.

“On behalf of Expos and baseball fans everywhere, we congratulate long-time Expo legend Tim Raines on his long overdue and much deserved Baseball Hall of Fame honour. With a career than spanned Rusty Staub in 1979 to Vladimir Guerrero in 2001, Rock was the quintessential Expo – and we can’t wait to be a part of an expected large and boisterous contingent of Expos fans next summer in Cooperstown. We call on amateur baseball leagues in the region to cancel all July 30 games, hop aboard our buses and help make a statement about Montreal’s passion for baseball,” said Matthew Ross, ExposNation Chairman and Founder.

Fans are invited to sign up to the ExposNation newsletter at ExposNation.com for the latest information about the Raines Cooperstown trip. In 2016, ExposNation filled two buses to Cooperstown to honour Pedro Martinez at his induction ceremony.

ExposNation is a non profit corporation that has worked since 2013 to promote Montreal as a viable MLB market and partnered with other likeminded organizations and individuals to help the efforts to bring the Expos back to the Montreal region. ExposNation has been recognized by the National Baseball Hall of Fame, the Major League Baseball Players Alumni Association, ESPN, Evenko, Baseball Quebec, former Prime Minister Stephen Harper, Prime Minister Justin Trudeau and Mayor Denis Coderre.

Show your support for Tim Raines 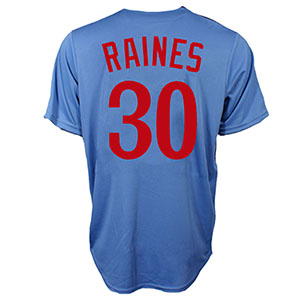