A few memories of my youth and Nos Amours

All my youth, my parents would bring us to see some baseball game in Montreal during summer. Being from the Outaouais region, it was a 2hours drive to the Big O, and I firmly believed it was our duty to go see at least a game per year to the Olympic Stadium. But, as we were usually spending a few days in the Montreal region, I would ask my parents to bring us to more than one game, and it was usually pretty easy to convince my parents. My best year was 6 games in the same summer.

And what about those school outings at the end of the year ? Always at the Montreal Expos. We would do a round trip in buses the same day of the game. This trip was worth a lot more than a trip to “La Ronde” or Wonderland, and the trip was worth the struggle of the whole school year that I found boring.

Later on, when my baseball player career was ended by the desire to chase girls rather running the bases, I would nevertheless drop my interest for “Nos Amours”. We were in 1994 and it was our year! Today, we know it, we probably got rob of a championship.

In 1996, it was the year of the Oh Henry! I probably gained a few extra pounds to my slim silhouette because of Henry Rodriguez. 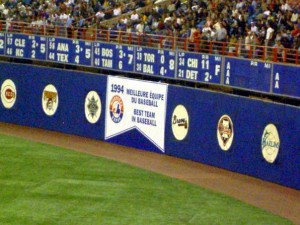 Always in a mindset of lady’s courtship, I remember one game most of all, not because of the score, the visitors or local team, but because of an event during the game. One man had asked his girlfriend to marry him on the big screen. Wow. To me, it was the best idea ever, and I told myself I would do it at the right time. Today, I’m married; I didn’t have the chance to do it as nos Amours have relocated as we all know it. But, I still had the chance to do something similar. In 2004, I organised a train trip from Ottawa to Montreal for a 13h05pm game with my girlfriend at the time. This trip was beautiful day and sort of solidified our relation.

On a different note of my memories, I remember the baseball game in French. Whether it is Jacques Doucet, Rodger Brulotte, Denis Casavant or Marc Griffin, the pioneer for French baseball is Jacques Doucet. And just for that I believe that he deserves a place at Baseball Hall of Fame. Whether it is the Ford C. Frick award or a special award, we all had a privilege of listening to the radio in our young years, and this must be awarded. I’m hoping that 2012 is the year for Jacques Doucet and I’m grateful at TVA Sports for giving us the opportunities to listen to Jacques Doucet once again with the Toronto Bluejays.