Since Major League Baseball became what its name says, a major league, exclusive distribution agreements have been part of the landscape of professional baseball.  Except for a few odd cases, the leagues negotiate deals with the different brands in order to get the best deals for the teams.  What is the best deal?  Often times, money is a big part in those exclusive deals, but product supply and demand is also as important.  The more people get their hands on the products, the more money comes back to the league and the teams.  Brands must also be very attentive to what is going on in the sports world.  Big bucks are often at stake. 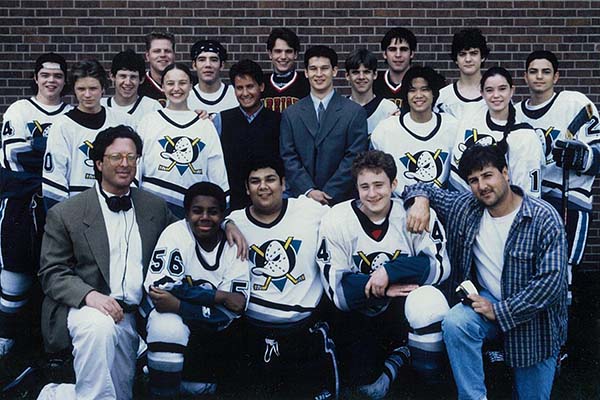 The Deflategate scandal doubled Tom Brady’s merchandise sales.  The announcement of LeBron James’ coming home to Cleveland in 2014 grew the Cavaliers’ merchandise sales by 700%.  Remember The Mighty Ducks movie franchise?  That very first movie helped Disney secure an NHL franchise for Anaheim and brought in millions in merchandise sales.  At one point the Anaheim team grossed more than 80% of all merchandise sales of the NHL.  Two years following the last movie of the trilogy writer and creator Steven Brill even sued the Mighty Ducks Hockey Club Inc. and Walt Disney Pictures.  He said he deserved a percentage of the total sales, as he was the creator of the image of the hockey team.  After years of legal battles, Brill was awarded an undisclosed amount by Disney to close the case.

If you ever take the time to look at old pictures from the 50’s you will see that most women were wearing a dress with a little hat and men were wearing dark suites with a round top hat.  You may get a sign of a small pennant if you spot a child, but nothing more.  If you compare it to a picture of the crowd now, you will be shocked to see that almost everyone is wearing some sort of merchandise.  A team jersey, sweater, t-shirt or hat.  The times are changing and official merchandise is becoming one of the most important sources of revenue for all major league teams.  If teams don’t adapt, they lose out to other teams, which essentially brings the need for some teams to constantly change their image, change their logos, change their jerseys, change their names.

The NHL currently has Reebok and will soon have ADIDAS, the MLS has ADIDAS, the NFL has Nike, the NBA has Nike and the CFL has ADIDAS.  Major League Baseball is, like most North American major league, trying to get a better control on all game worn uniforms officialising deals with specific suppliers for all their teams.  Majestic is responsible for all uniforms worn on the field, New Era the caps and in 2017 Stance will be the official provider of the socks.  In non-uniform deals Rawlings has been the official baseball supplier of MLB since 1977 (succeeded Spalding) and Schutt with its Jack Corbett MLB Hollywood is the official base of MLB.  Their bases have been used on MLB fields since 1939.  The list goes on and on.

What about the Expos?

When digging into the history of the Expos and their official worn merchandise I decided to go to the ultimate memorabilia owner of Nos Amours.  Perry Gee.  Perry is probably one of the most impressive collectors of memorabilia outside of the Baseball Hall of Fame and one of the organisers of Expos Fest, an event held last April that helped raise over $50,000 for the Kat D Dipg Foundation and the Montreal Children’s Hospital.  Flipping thru old memorabilia Perry chronologically went thru the different eras of baseball in Montreal.

When the Expos first started in 1969 their official cap providers were KM Pro Company.  KM (Kaufman-McAuliffe) made caps for half a decade before folding in 1976.  New Era eventually took over most of their clients, including the Expos.  The Expos continued wearing New Era caps until their departure in 2004. 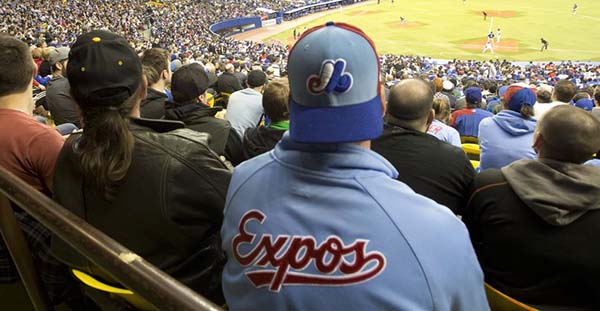 As for uniforms the Expos started out with a manufacturer based out of Chicago named Wilson.  Rawlings ultimately took the task from Wilson and continued distributing the Expos’ uniforms till 1993 when Russell Athletics stepped in.  Russell made the uniforms until the Expos ultimately left Montreal.  And what about Majestic?  Majestic only supplied the Expos with their batting practice uniforms.  It’s only later, in 2005, that Majestic Athletics signed an exclusive deal with Major League Baseball.  Just last year Majestic extended their deal with MLB till 2019.

The Expos wore American Baseball Cap Company (ABC) batting helmets for most of their time in Montreal.  You might remember their logo resembling three little batters behind the batters helmet.  Rawlings Sporting Goods Co Inc. bought out ABC in 2003 and took over the business of making the helmets for Major League Baseball.  Still to this day, Rawlings is the provider of the official helmet of MLB.  Historically ABC had been in business for 51 years before being bought out.  To make it even more special to Montreal, most baseball fans will remember the founder of ABC.  His name? Branch Rickey.  Yes, the same Branch Rickey who signed Jackie Robinson to a minor league contract with the Montreal Royals.  The rest is history.